The 5 best performing NFT marketplaces in 2022

NFTs have been around for a while, but didn’t hit mainstream attention in 2021. However, between then and now, the market has grown remarkably. While they have exciting possibilities, they are popularly known for their expensive sales and celebrity adoption. Some NFTs have enjoyed more success than others and also racked in more money.

PFP NFTs are currently the most popular NFTs. They have also enjoyed the most mainstream attention and population because of the massive sales. However, NFT artworks have equally enjoyed considerable success too.

What are NFT artworks?

NFT artworks are artworks turned into NFTs and placed on the blockchain. Transforming them into NFTs adds authenticity to the art pieces and makes it easier to confirm their ownership.

Unlike traditional artworks, using NFTs to sell artworks is more favorable to artists. Using NFTs removes artists’ dependency on galleries and introduces a royalties scheme that favors artists more. Hence, it is no surprise that NFT artworks gained attention and adoption quickly.

Like traditional art pieces, there is no telling how much an NFT artwork is worth. You only know by how much someone is willing to pay for it, and since their rise, NFT arts sales have repeatedly broken records.

Let’s look at a list of the seven most expensive NFT artworks ever sold.

Everydays: The First 5000 Days is an NFT artwork by famous digital artist Mike Winkelmann also called Beeple. The artwork is a compilation of 5,000 digital pieces he created daily between May 1, 2007, and Jan 7, 2021.

The NFT was sold at a Christie’s Auction to Singapore-based crypto investor, Vignesh Sundaresan, immediately skyrocketing NFTs into popularity. However, the sale has been the subject of several controversies, including rumors that Sundaresan and Beeple planned the sale to bring attention to another speculative asset Beeple owned.

Human One is another NFT artwork from Beeple which sold at another Christie’s 21st Century Evening auction on November 10, 2021.

The item features an astronaut suit walking forward, enduring different weather and biomes, represented by a generative sculpture that mixes physical and digital art. Since the NFT is a dynamic NFT that can change form, Beeple still maintains access to the piece and plans to evolve its content for the rest of his life. 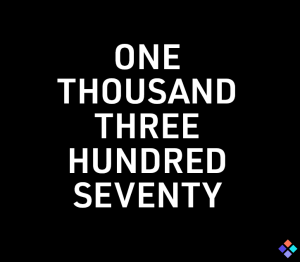 Clock is an NFT art by anonymous digital artist Pak, who remains the highest-grossing NFT artist, as several of his collections and individual NFT art have grossed millions in sales.

The NFT, like its name, is a clock which counts the days WikiLeak’s founder Julian Assange has been locked up in London’s Belmarsh Prison. Pak and Assange worked to create this NFT to help fund Assange’s legal defense. 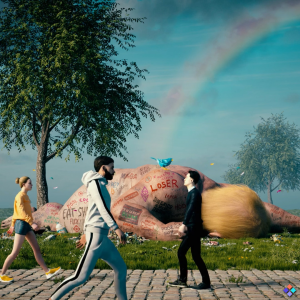 Crossroads is Beeple’s third entry on this list, featuring a generative NFT of a large man lying face-flat in the background.

The work represents a dynamic art piece in the sense that it can change form and shape and is one of the earliest examples of dynamic art pieces. Beeple made the artwork before the 2020 U.S. presidential election between Donald Trump and Joe Biden and revealed that the result of the election would trigger a change in the NFT artwork. Donald Trump lost the elections, and that left us with the final form of the NFT – a gratified and mocked man lying face down on the floor. 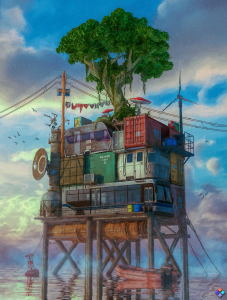 Beeple is widely known for his record-breaking sales, but the digital artist sometimes uses his art to reflect the everyday life of people and the challenges everyone faces. Ocean Front is an NFT artwork in this direction.

The piece depicts the state of climate change and the precarious state of the world by showing minivans and trailers balanced on scaffolding, and a tree rests at the very top. It also makes up part of the record-breaking Everyday collection.

The NFT was scooped up by Justin Sun, the founder and CEO of Tron Foundation, for $6 million. After which, the sale proceeds were given to The Open Earth Foundation, a non-profit organization raising awareness about climate change. 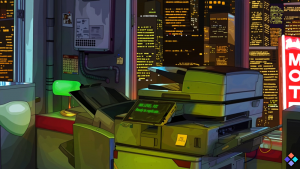 Creativity and ingenuity are attributes that add to the uniqueness of art pieces. These attributes were standard features in traditional art pieces. In this art piece, Michah Dowbak, also known as Mad Dog Jones, reminds us why some pieces sell for as much as they do.

Titled REPLICATOR, the NFT artwork is a 50-second looped video that tells the story of a machine through time. The artwork depicts the accelerating wave of development through a digital image of a photocopier in a Los Angeles office space and demonstrates how fast recent technologies are quickly going into obsolescence.

The NFT is also a dynamic NFT capable of changing form in reaction to a particular event, time, or trigger. This change is made possible by the smart contract embedded into the NFT. The first artwork is the genesis of seven other NFTs, which would replicate the art piece before them and tell a unique experience of the machine through time. Eventually ending with a seventh piece called the JAM, the final piece in the series. 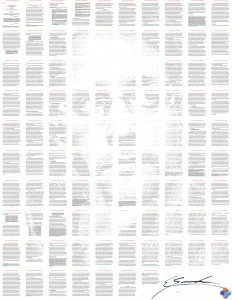 Stay Free (Edward Snowden) is an NFT artwork that shows how NFTs could be put to multiple uses. This NFT serves a purpose similar to that of Clock by Pak. However, in this case, the NFT was created by Edward Snowden rather than another artist.

The NFT depicts images of National Security Agency whistleblower Edward Snowden and pages of a court of appeal decision that ruled the mass surveillance program Snowden exposed had violated U.S laws. Edward Snowden, in 2013 leaked highly classified information about the mass surveillance program, after which he went into exile in Russia. The sale profits were donated to the Freedom of the Press Foundation.

*All investment/financial opinions expressed by NFT Plazas are from the personal research and experience of our site moderators and are intended as educational material only. Individuals are required to fully research any product prior to making any kind of investment.

A blockchain maximalist who believes that technology is necessary for the future we are heading to. An ardent researcher and writer who uses his writings to inform about the prospects in the blockchain space.

The 5 best performing NFT marketplaces in 2022

Beeple Studios to Launch with an Epic Party

Here’s Why Solana Ceased Block Production for Seven Hours on…

Tether’s Tornado Cash Noncompliance Is Less Brave Than You…

Unraveling the Mystery: Making NFTs Work for your Loyalty…