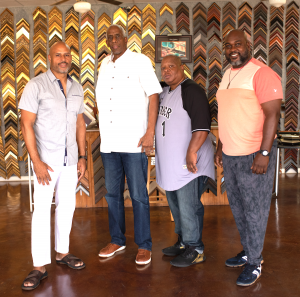 These cherished items are more than just memorabilia, they are historical artifacts that represent an important part of American history.”

In 1950, Lloyd broke the color barrier to become the first African-American to play in the league, followed by a distinguished career. Lloyd endured intense discrimination before helping the Syracuse Nationals win the NBA Championship in 1955. He then became the league’s first Black Assistant-Coach in 1965 and was inducted into the Naismith Hall-of-Fame in 2003. Entering the league six years before Bill Russell, Lloyd was often described as the “Jackie Robinson of basketball” and passed away in 2015 at the age of 86.

“We’re very excited to bring these extremely rare and historically significant collectibles to sports fans, memorabilia collectors and NFT enthusiasts around the world” says Jonathan Herman, Founder and CEO of Baller Mixed Reality. “These cherished items are more than just memorabilia, they are historical artifacts that represent an important part of American history. As we release these items, we look forward to telling the largely-unknown story of Earl Lloyd’s journey with the help of his son Kevin.”

In partnership with Icon Sports and Earl Lloyd’s family, Baller Mixed Reality is producing this innovative collection of augmented reality assets which, unlike other NFTs, can be placed into real-world environments and viewed from 360 degrees in high-definition 3D. Additionally, the authenticity and ownership of these limited-edition assets will be verifiable on the blockchain, eliminating the potential of fraud or counterfeit.

Look for this collection coming to OpenSea (https://opensea.io/baller_mixed-reality) and join Baller’s Discord for drop dates and member discounts (https://discord.gg/QFMXFXdce4).


EIN Presswire’s priority is source transparency. We do not allow opaque clients, and our editors try to be careful about weeding out false and misleading content.
As a user, if you see something we have missed, please do bring it to our attention. Your help is welcome. EIN Presswire, Everyone’s Internet News Presswire™,
tries to define some of the boundaries that are reasonable in today’s world. Please see our
Editorial Guidelines
for more information.

The Most Important Bear Market in Crypto History

Absorb a Piece of High Culture at the African Museum in…

Elon Musk’s Tesla Has Sold 75% of Its Bitcoin Holdings

Celsius Organizes the First NFT Hackathon for Artists and…

Parity and HEARTLENT Group team up for NFT collection…

Solana Faces the Music with the Lollapalooza NFT Scavenger…